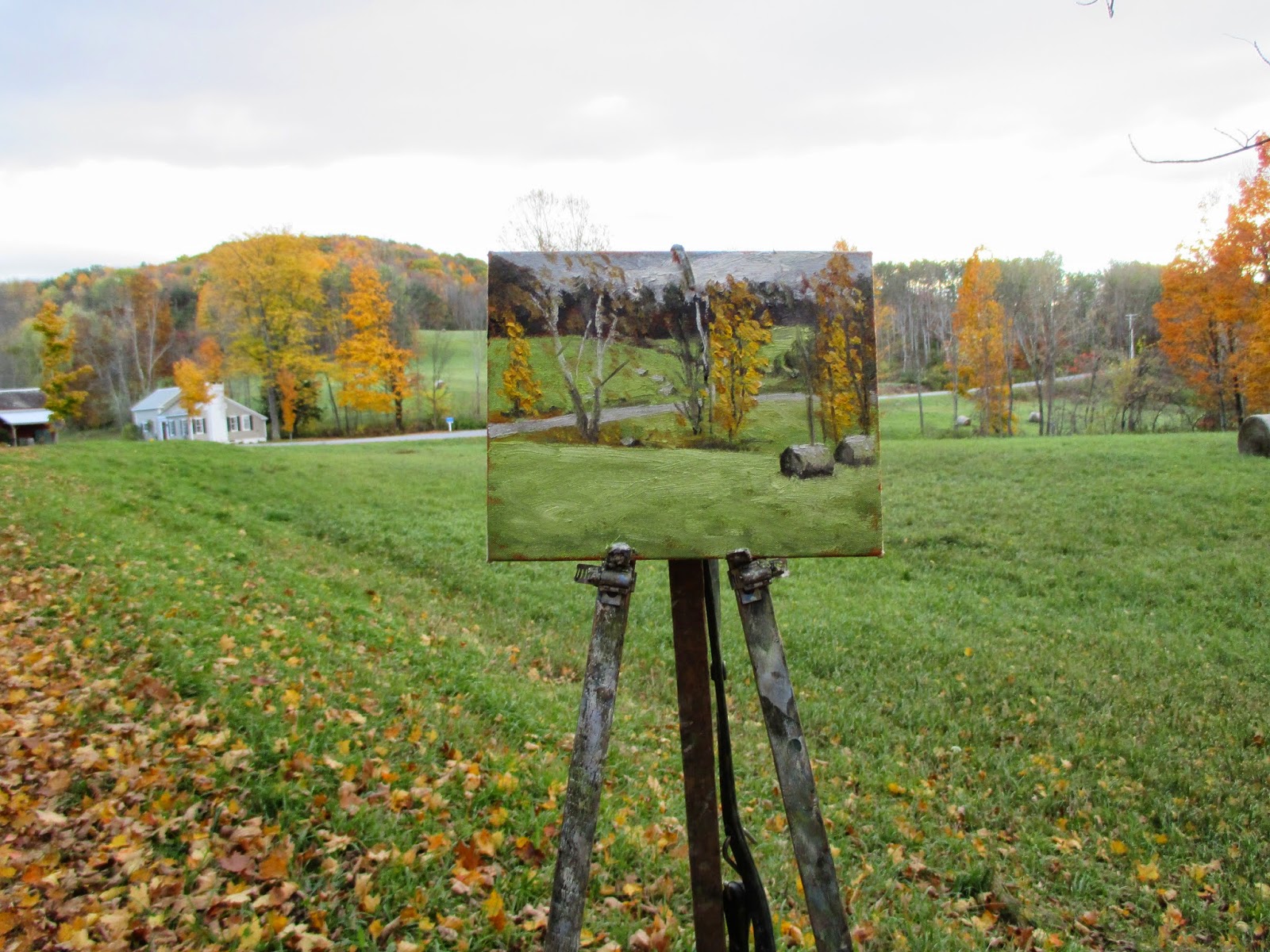 I'm not wanting this fall season slip through my fingers without painting some foliage, an least the colorful kind. It seem the only way to really feature color is to make a tree portrait, which is OK, but not my prize, anyway I found this scene and I liked the play of color and the composition, so it worked. 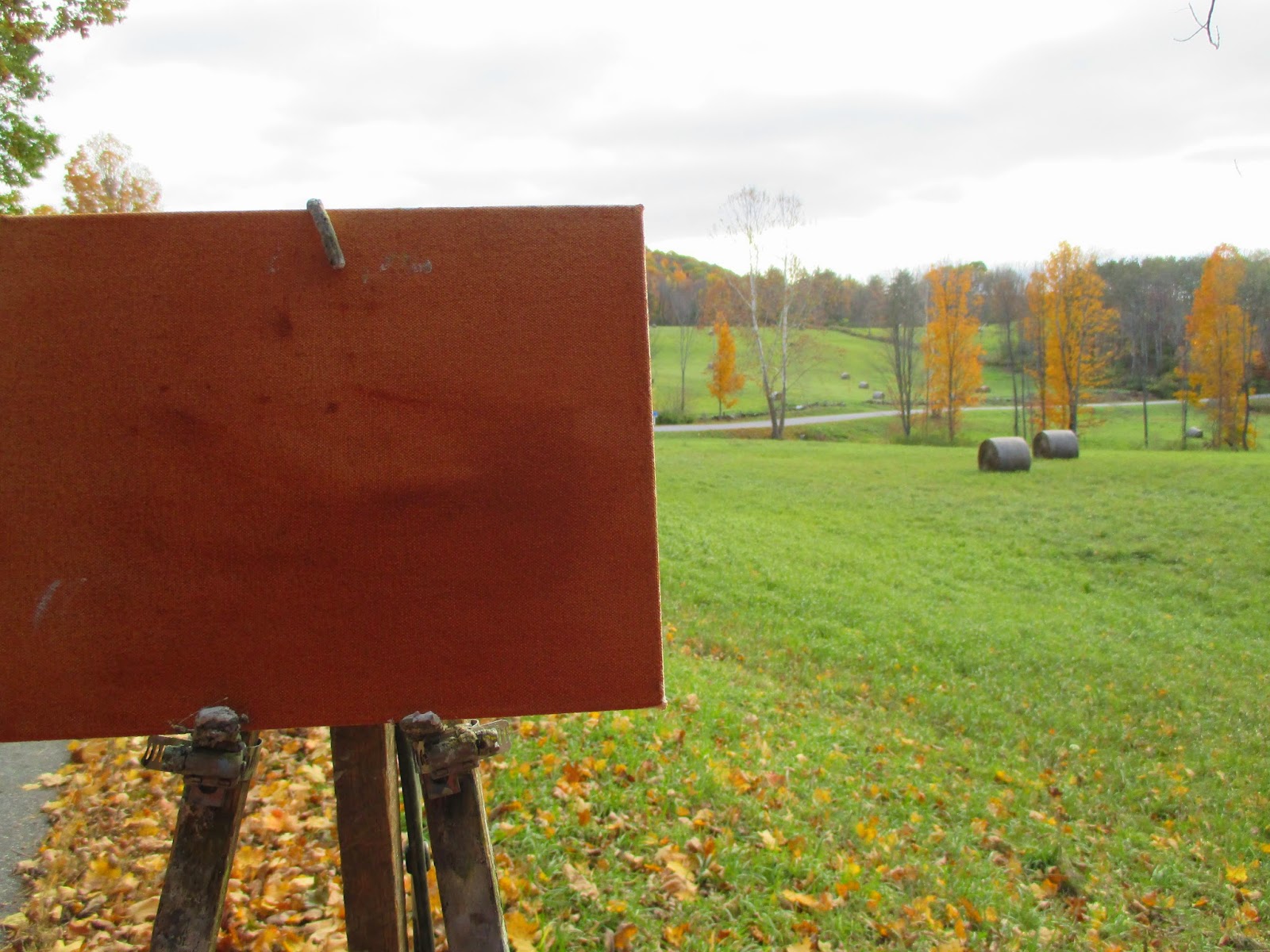 This shows my set up close to the way I see it. I included three of the yellow trees, and the two round bales of hay in the foreground. I liked the pattern they made, it just felt right. 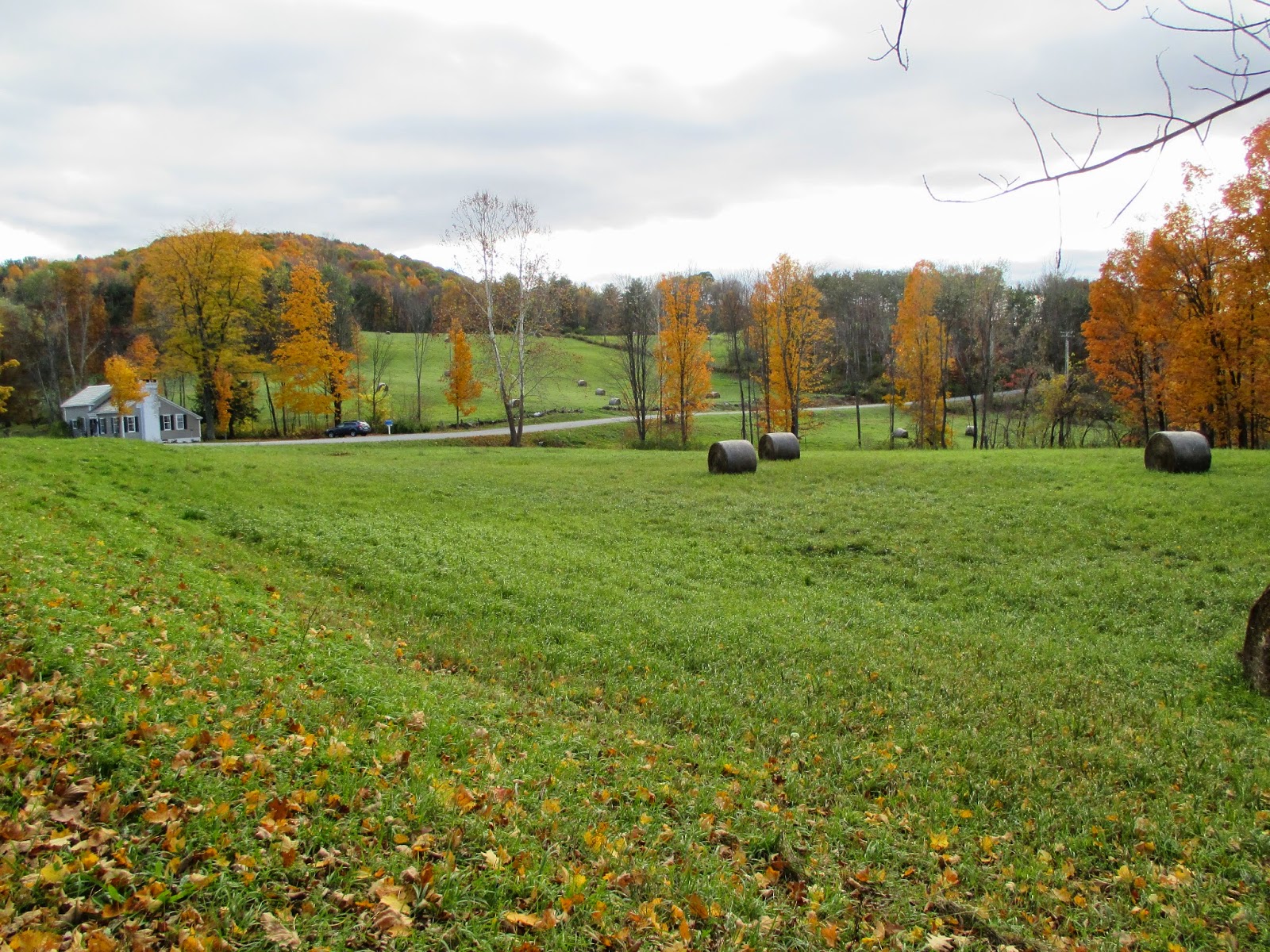 Here is the whole scene, when I first got out of the van, I liked the light, but wasn't sure how I'd organize it. There were too many trees! I was also thinking the clouds would give way, but they didn't. 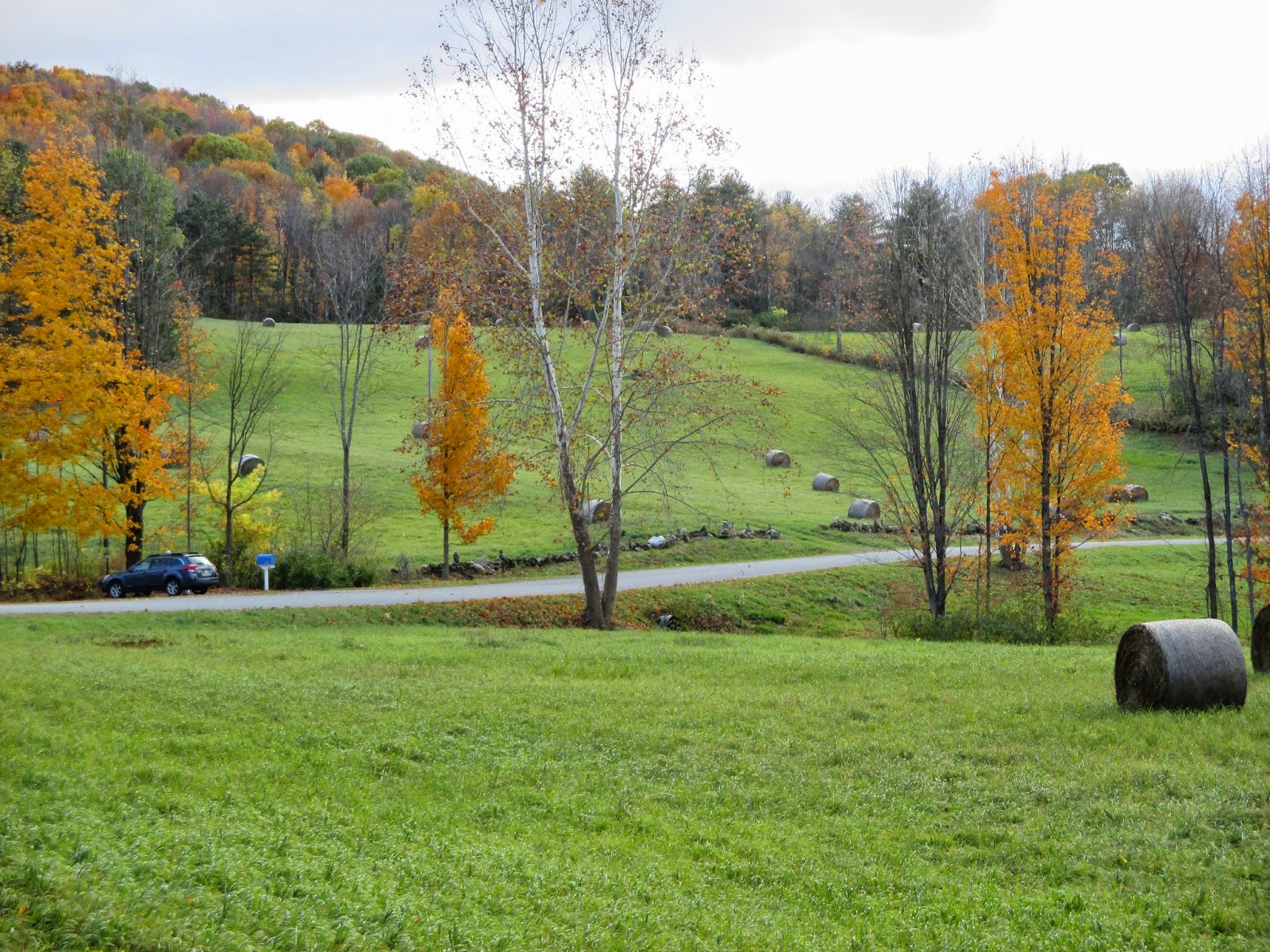 Here are three trees to the left of the scene I painted.  In this scene is a car, a mailbox, and one bale of hay. I guess I didn't want a car, and it didn't feel right,  maybe it was the single bale on the right. 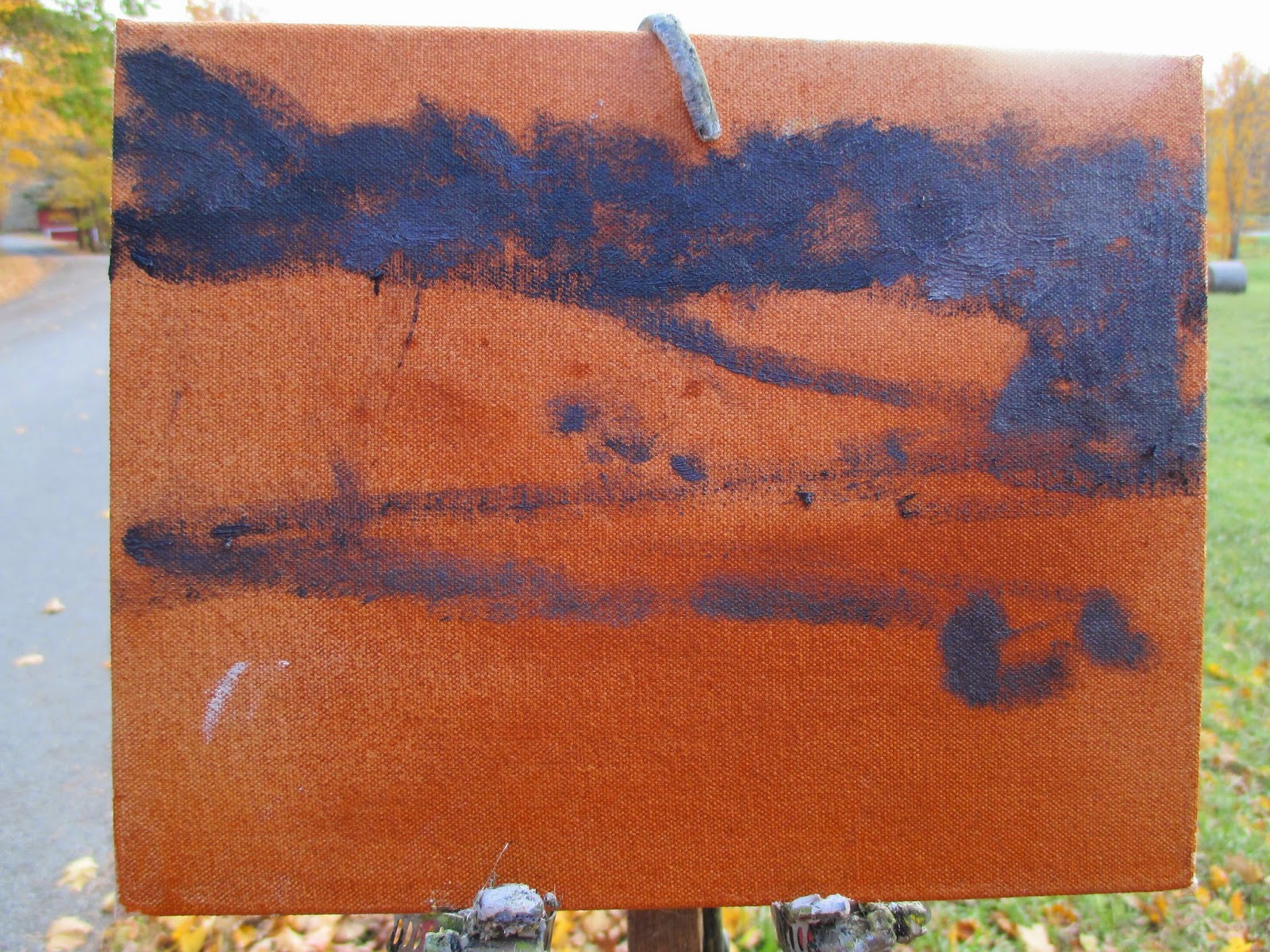 By the time I get to actually paint, I know what the big elements are going to do, and the zig-zag of the field/road/field/sky is a theme I'm familiar with and it works. 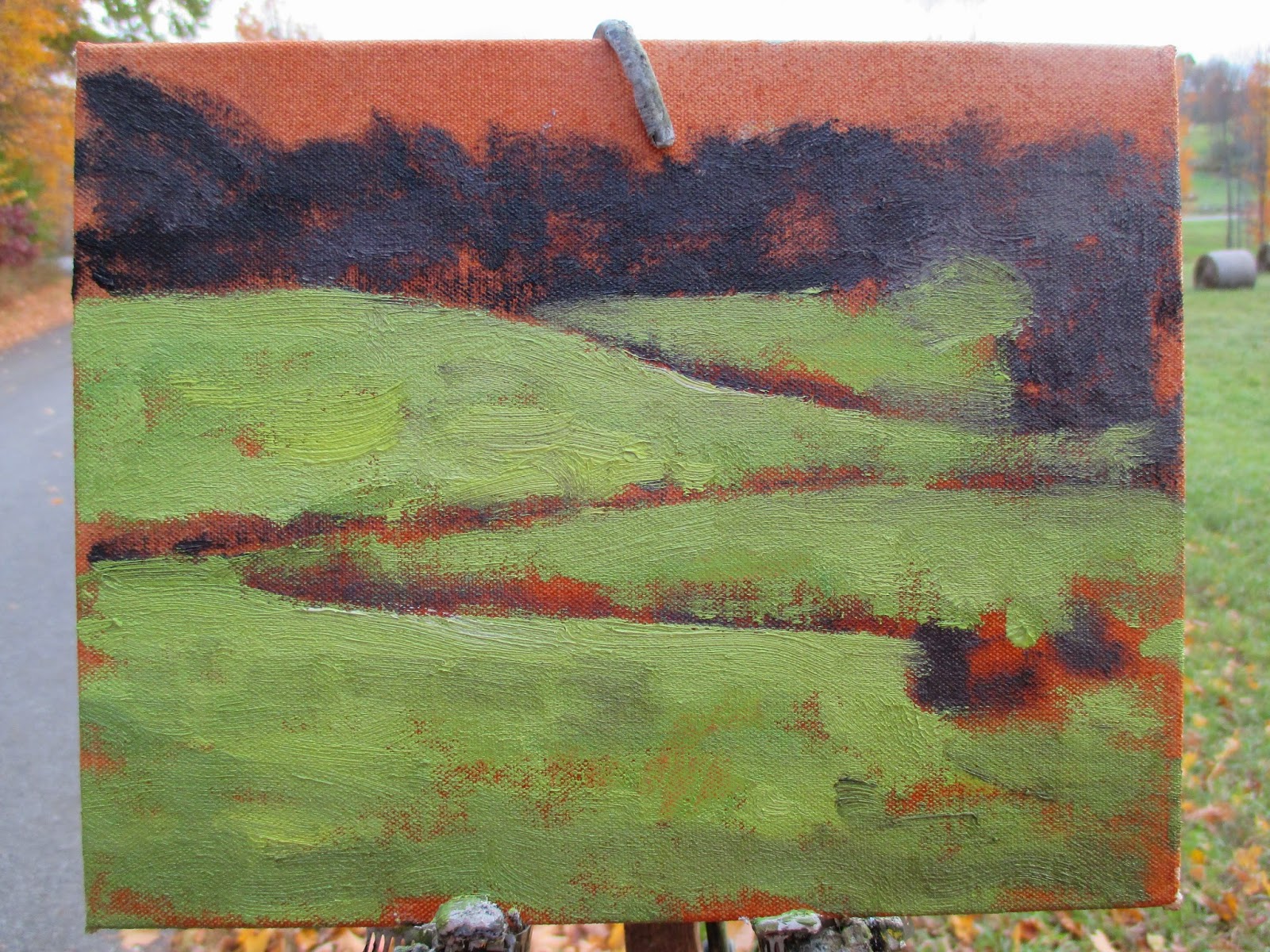 I was waiting for the sky to clear, but there were plenty of greens to work..... 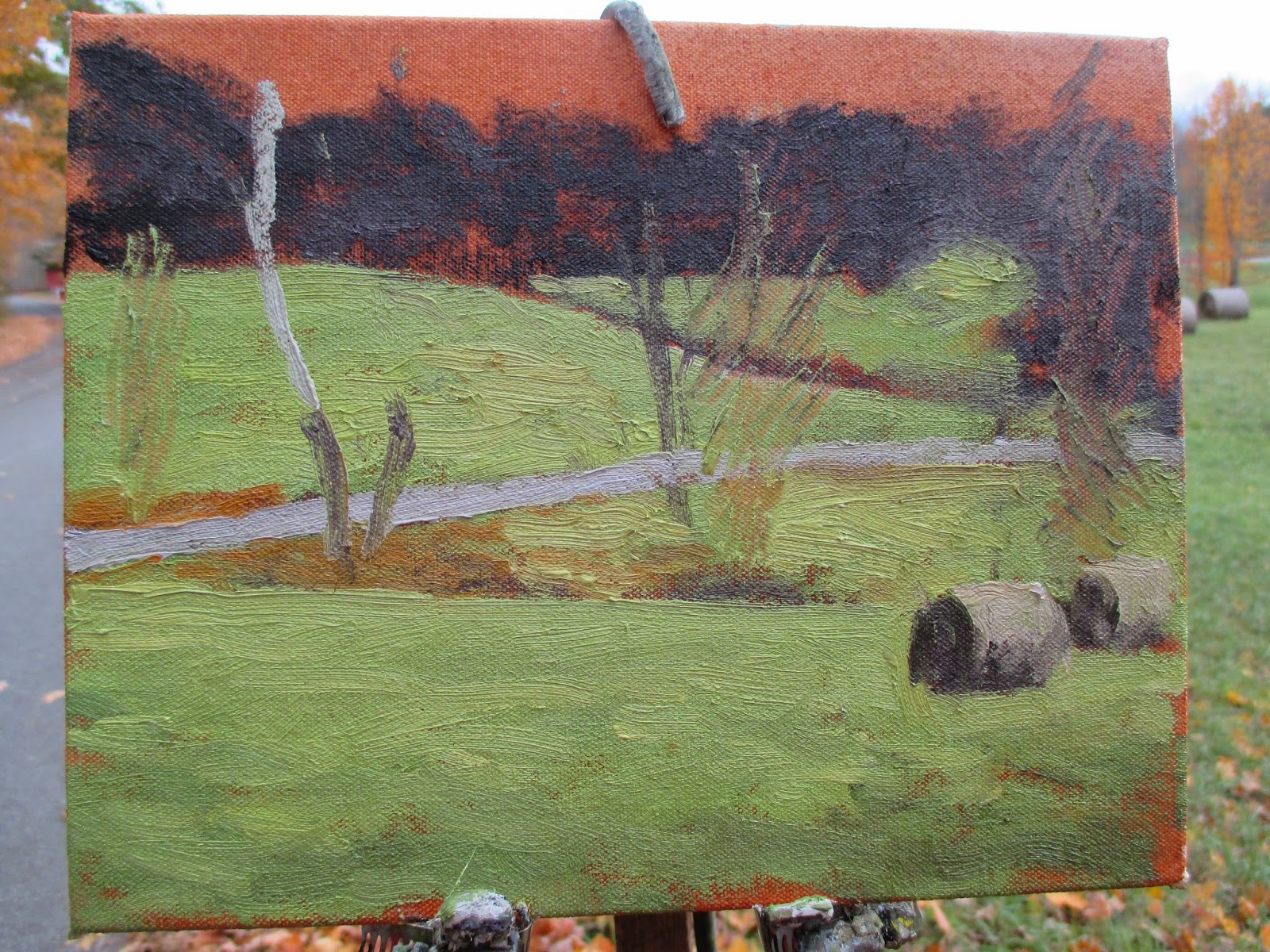 By this time I had to get the sy in clouds and all, though there were some breaks in them that let some nice light in..... 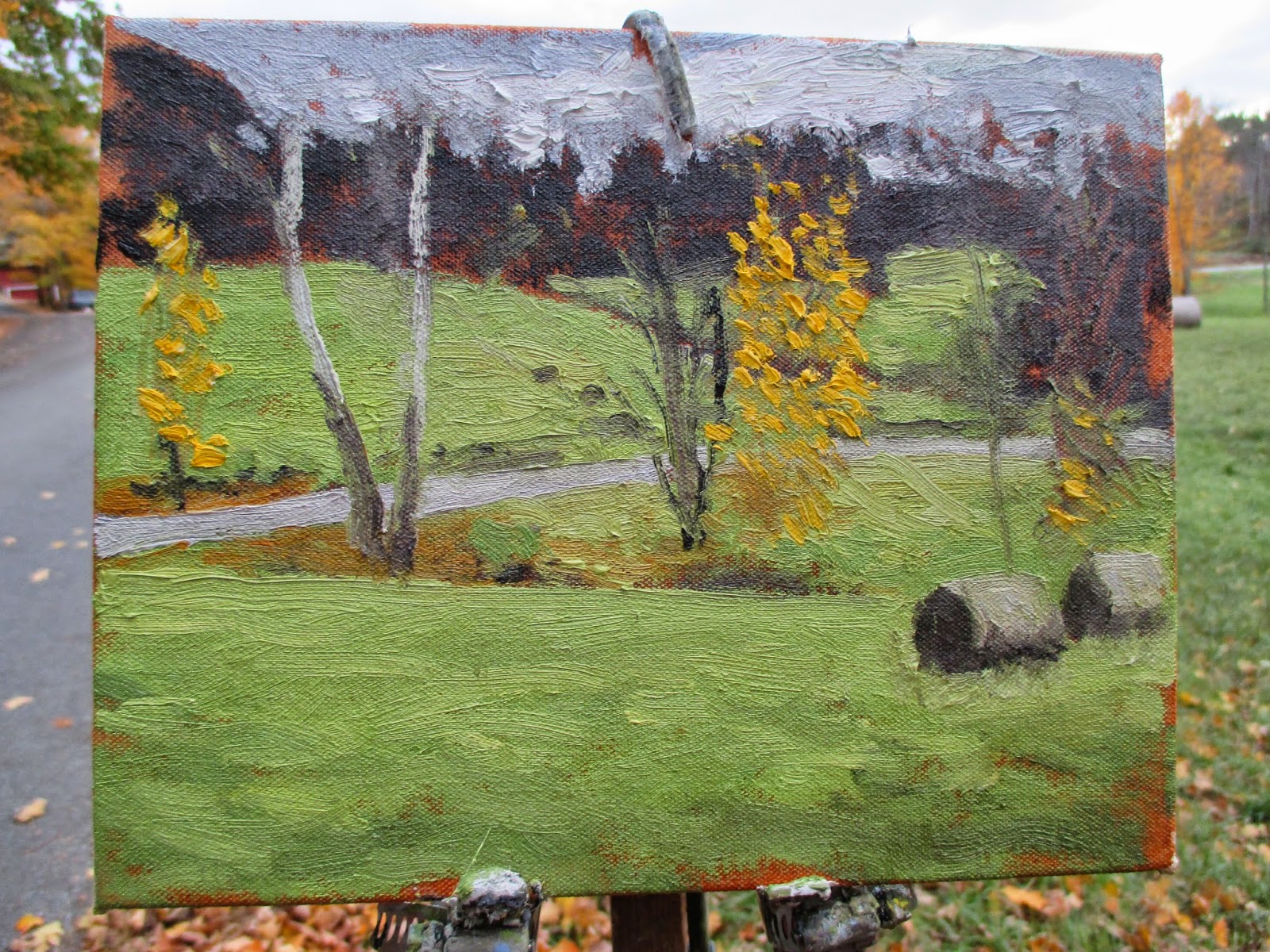 The sky made a huge difference, after which I was able to start putting in the bright yellow of the subject trees. 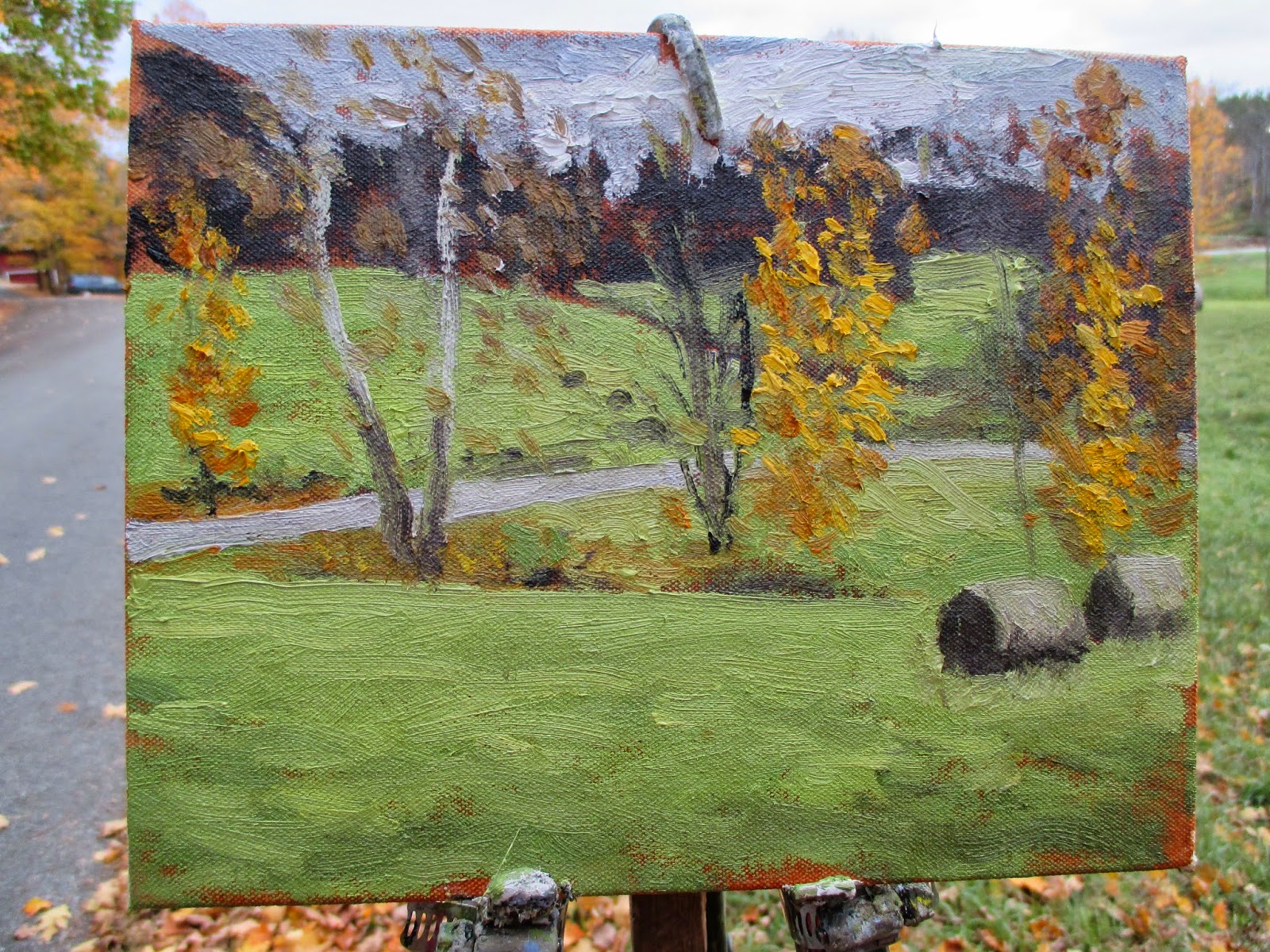 I wasn't sure if the lights of the yellow trees would be bright enough, and that maybe I should have made everything else darker. I did break out some Flake white for this task. 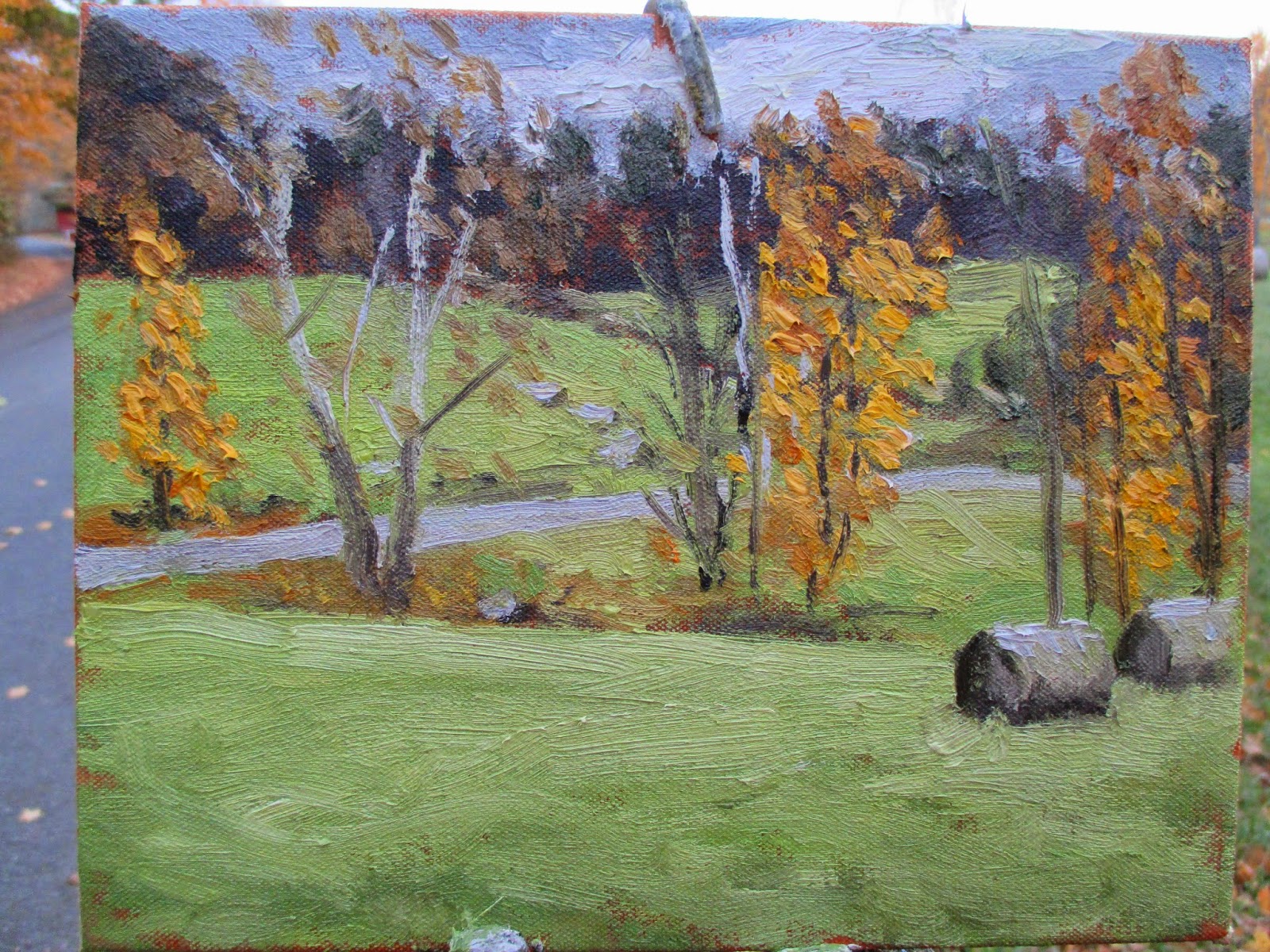 Here is where I ended up, I had decided I would do the 8 x 10 and not the 14 x 16, because I wanted a quicker session, I ended up spending an hour and a 1/2. So it shows you that a smaller canvas doesn't necessarily equate with less time. 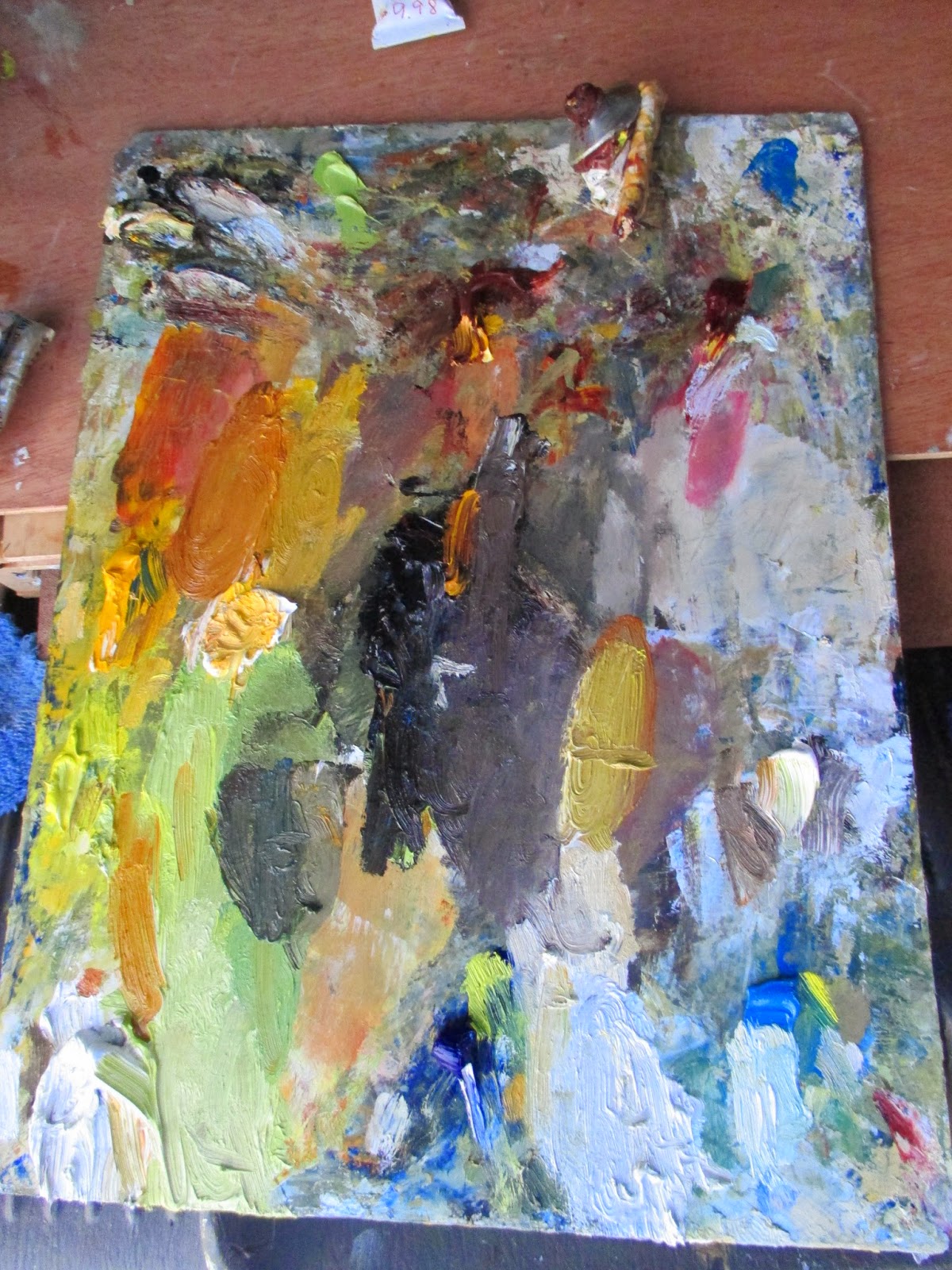 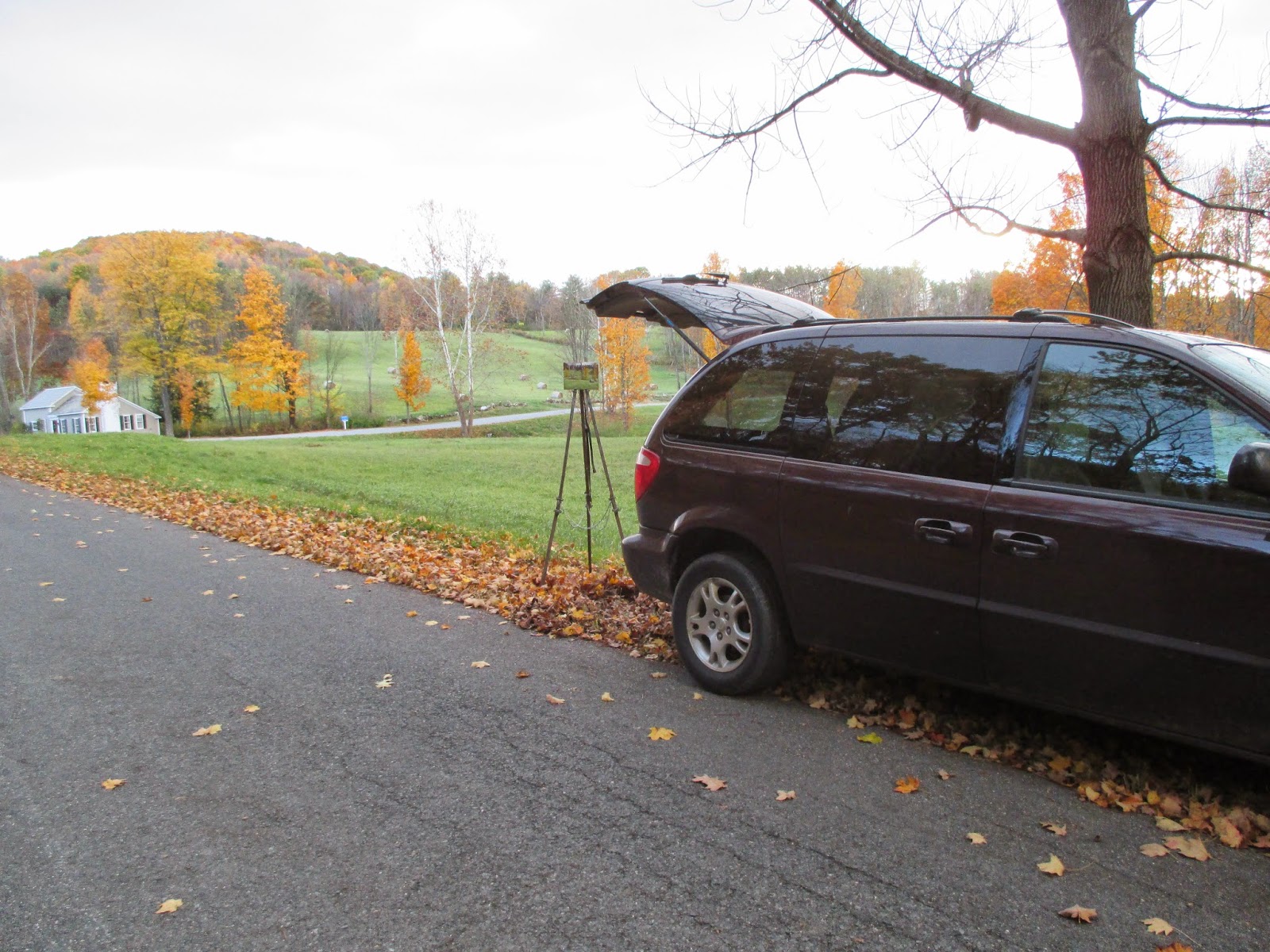 Not bad, as the crow flies, I was very close to my favorite river and just a bit farther up the road to my favorite metal truss bridge.
Posted by Matt Chinian Painting blog at 5:49 PM